Smith & Wesson began production of these third model .22 caliber target revolvers in December of 1946 following World War II. So most of these third model guns you might run across were manufactured from 1947 to 1957. In 1958 it became the Model 17. Both Colt and Smith & Wesson were at the top of their game in the 1950s. It was a unique time when manufacturing processes were very different.

"I'm not saying these pre-17 third model versions of the K-22 are better or more valuable, just the period I chose to focus on."

The majority of the old guns I acquire and write about, are also guns that I want to take to the indoor range with my son and son-in-laws. The older I get, the less inclined I am to hang onto the safe queens. Oh, I still acquire unfired guns from time to time, just to photograph and write about. But the ones I really care about maintaining, are the ones I can shoot without thinking twice.

The K-22 Masterpiece is an ideal gun to use for target practice. And with the ammunition shortage we've experienced in 2020 and 2021, .22 ammo is less expensive to buy, when you can find it.

Throughout the years of my gun collecting hobby (I'm really more of an enthusiast than collector), it was always in the back of my mind to acquire a special gun from my birth year. As strange as it may seem, that didn't happen until 2021 after I developed an obsession with this line from Smith & Wesson. I recently purchased this Model 17-1 just by chance. 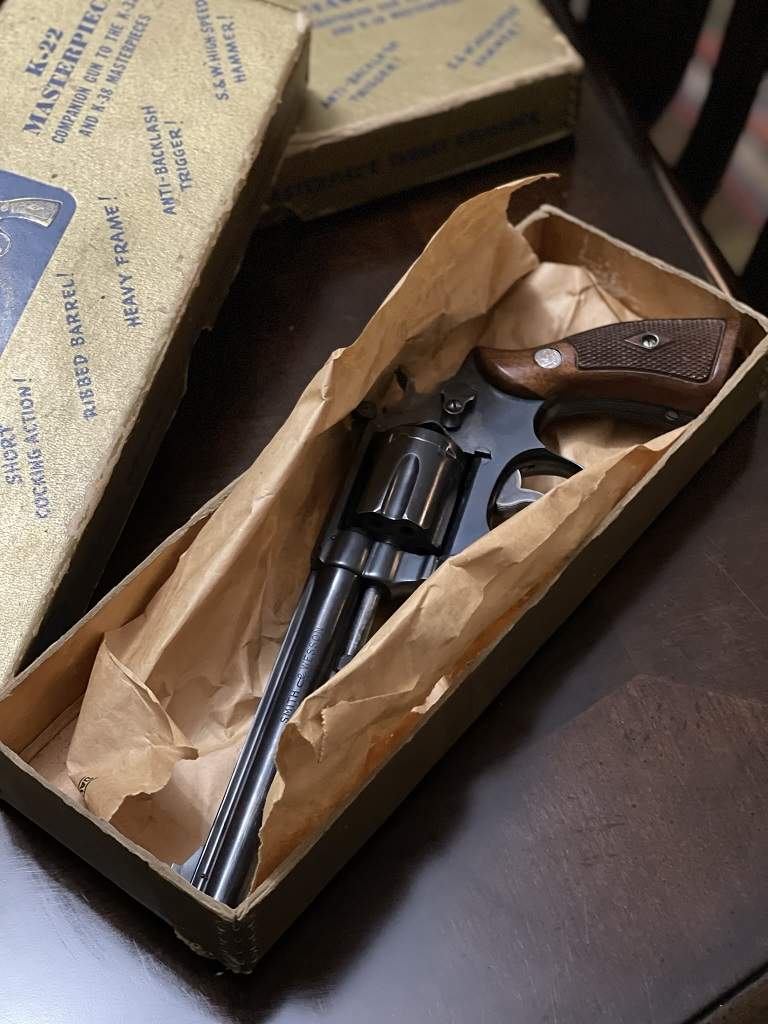 On a final note, if you have an interest in these guns, you can find the Serial Number Table for the Smith & Wesson Third Model K-22 Masterpiece here. And in this blog post, I show how to easily tell the difference between 5-Screw, 4-Screw and 3-Screw guns without removing the grips.

Sometimes referred to as "wheel guns", in reference to the cylinder, revolvers have taken a back seat to semi-automatics in recent years in military and law enforcement applications.

Lower ammunition capacity and longer reload times compared to semi-automatics are the main reasons for the trend that occurred in the 1980s and 1990s. The flat profile of semi-autos make them more suitable for concealed carry. Revolvers still remain popular in the role of back-up and off-duty guns among American law enforcement officers (LEO) and security guards. Revolvers are still common in the American private sector as defensive, sporting, hunting and collectible firearms. 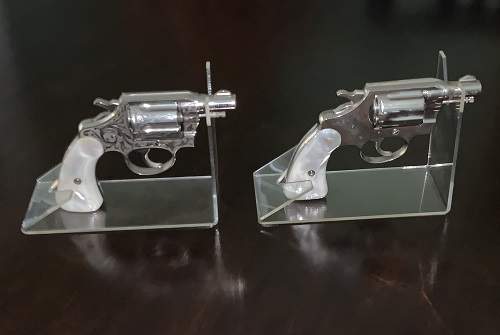 Other than single-shot and multiple barrel guns, handguns can be divided into two categories.

Want to learn what year your Colt Revolver was made?

The Serial Number Tables linked at the bottom of the page can identify more than 3 million Colt revolvers. I'm also sharing an external link to Colt's Database Search Tool.

A Closer Look at Revolvers

In an earlier article we looked briefly at revolvers and mentioned a couple of prominent examples, the Colt Peacemaker M1873 or SAA (Single Action Army) and the Smith and Wesson Model 10. The former, a single-action handgun associated with the old west and the latter, a double-action, often called the S&W .38 Special. Both these handguns are “six shooters” and, in updated models, manufactured today.

Let’s take a look at some variations on the theme of revolvers.

The revolver’s cylinder is firmly attached, front and rear to the frame of the handgun. The weapon is loaded when the “loading gate” is swung aside and the spent round ejected manually by a spring-loaded rod set under the barrel. This is the standard method of loading a single-action revolver. 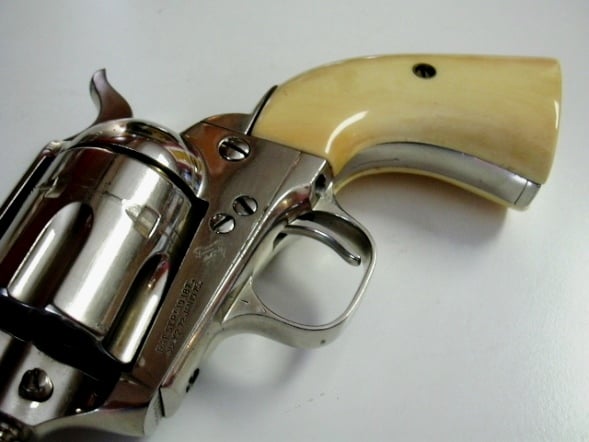 This 1931 Colt SAA Peacemaker is a prime example of the fixed cylinder.

The revolver’s cylinder is mounted on a pivot that, when unlatched, allows the cylinder to swing out and down. All spent rounds are ejected in one motion as the shooter presses a rod projecting from the front of the cylinder mechanism. The operator can then load the cylinder with one round at a time or use a speedloader to load several cartridges or the entire cylinder. The majority of today’s revolvers have swing out cylinders. 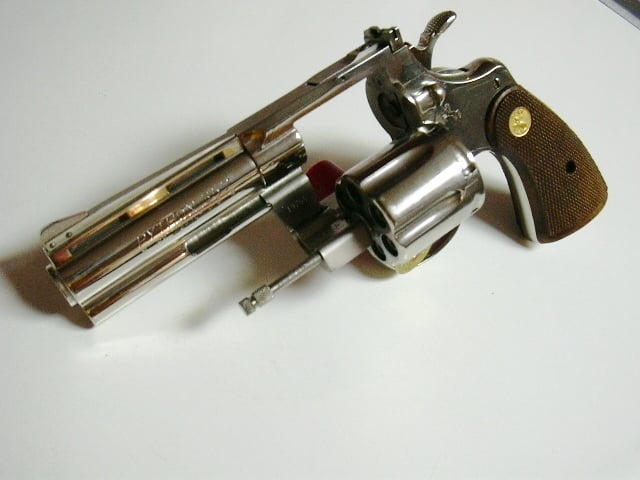 The handgun is hinged at the front of the cylinder. When the shooter releases a lock and presses the barrel down, the weapon opens at the rear of the cylinder, usually automatically ejecting spent rounds. The operator then reloads singly or with a speedloader. 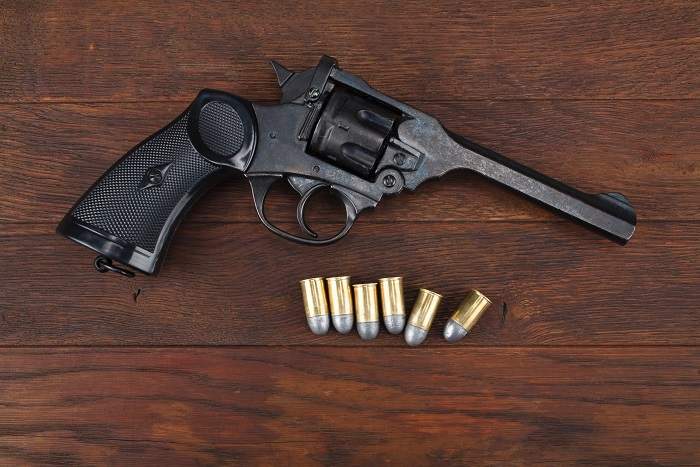 Although top-break revolvers have fallen out of favor, primarily because they cannot handle modern high-pressure magnum rounds, there are historical examples of fully-functional, efficient top-break revolvers. The British Army relied on the Webley top-break revolver until 1963. It was chambered for the .455 Webley, a rimmed cartridge that fired a .45 caliber bullet at a relatively low velocity, but produced excellent knockdown power.

It is also interesting that one of American History’s most famous lawmen, Wyatt Earp, was said to have been armed with a S&W Model 3 break-top revolver during the gunfight at the O.K. Corral.

Definition: A speedloader is most often a device that holds cartridges firmly in a circular pattern for reloading a revolver. When the handgun’s cylinder is empty, the operator slides the rounds into the open chambers and releases them simultaneously.

Thomas Rowe Drinkard was born and reared in Alabama. He graduated from the University of North Alabama with a degree in English. Upon graduation, he was commissioned an Army second lieutenant. Within two years he completed parachute school and was selected for the U.S. Army Special Forces (the Green Berets). He spent more than ten years with the fabled unit. For you guys that served (like me), I might add that Mr. Drinkard served with MACVSOG.

A key element to Colt's success was vigorous protection of his patent rights. Even though he lawfully held the only patent on a revolver, scores of imitators copied his work and Colt found himself constantly in litigation.

Author Comment: I believe the above is what started the old saying, "If it ain't a Colt, it's just a copy."

In each one of these cases, Colt's lawyer, Edward N. Dickerson, deftly exploited the patent system and successfully shut down Colt's competitors. However, Colt's zealous protection of his patents greatly impeded firearms development as a whole in the United States.

Colt's preoccupation with patent infringement suits slowed his own company's transition to the cartridge system and blocked other firms from pursuing revolver designs. At the same time, Colt's policies forced some competing inventors to greater innovation by denying them key features of his mechanism; as a result they created their own.

The power, accuracy and handling qualities of the Single Action Army (SAA) made it a popular sidearm from its inception, well into the 20th century.

The association with the history of the American West remains to the present century, and these revolvers remain popular with shooters and collectors.

George S. Patton, who began his career in the horse-cavalry, carried a custom-made SAA with ivory grips engraved with his initials and an eagle, which became his trademark. He used it during the Mexican Punitive Expedition of 1916 to kill two of Pancho Villa's lieutenants, and carried it until his death in 1945 shortly after the end of World War II.

The father of a very good friend of mine served under Patton, knew him well and told me stories of some of Patton's "antics", for lack of a better term. The one story that stands out in my memory is about the time that Patton squared off with the Chief of Police in Phenix City, Alabama. Patton and his troops were at Ft. Benning in Columbus, Georgia preparing to ship out for the war in Europe.

Columbus, Georgia is right on the Georgia-Alabama state line, with only a river separating it from Phenix City, Alabama. Army troops would routinely get into trouble at the bars and nightclubs in Phenix City. Four or five of Patton's troops were arrested for a Saturday night bar fight and were being held in the Phenix City jail. Patton telephoned the Chief of Police on Sunday morning to get his men released so they could ship out for the war on Monday. The Police Chief didn't like Patton's attitude and basically told him that the men would not get any special treatment and that it would be Monday before they could go before the judge.

Patton went ballistic! Patton informed the Chief that he was coming for his men and would be at the bridge that separated the two towns in thirty minutes, if he had to cross the bridge to get his men, the Chief would no longer have a jail when he left with them. Patton proceeded to take several tanks and lined up at the bridge. The Chief released his men. 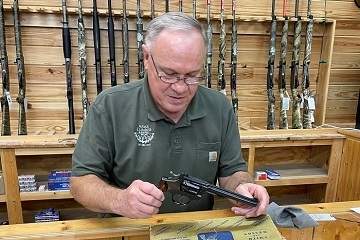 For a collector, when you make a trip to the gun store and walk out with a new 68 year-old gun, it's a... 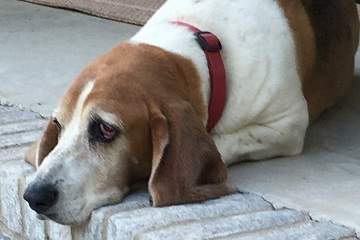 When a coon comes from the south woods and climbs my fence to invade the property, Roscoe will... 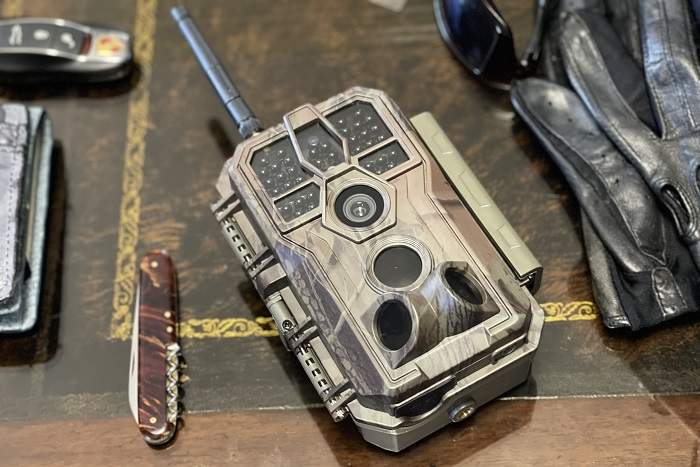